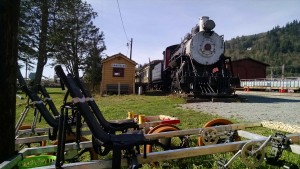 The owners are deeply committed to promoting and supporting the Scenic Bikeway Program working in depth with Oregon Department of Transportation, State Parks, and Cycle Oregon. Railrider Cycling allowed them another avenue to open up additional scenic “cycling” options for everyone to enjoy.

OREGON COAST RAILRIDERS , established in 2016,  uses 6 miles of The Port of Tillamook Bay Rail Road  which was originally known as  the Pacific Railway and Navigation Company. In 1911 the last spike completed the original rail road  that became affectionately know as the PRN, or Punk Rotten Nasty by those who worked hard  to maintain the rail line. The PRN was  later purchased by the Southern Pacific Railway.  OCRR operates  on 6 miles of the  original track from Bay City to Tillamook.   Rail enthusiasts can also ride the Oregon Coast Scenic Excursion train from Garibaldi to Rock-a-Way. http://oregoncoastscenic.org/.

2017- Oregon Coast Railriders is now managed on site by former guides Nate and Tara allowing the owners to focus on support and expansion.

2019 – Railriders is now dba Railrider Cycling. Name restructuring took place over the winter break in order to make it clearer that our compnay is a strong and growing tree with many expanding branches. Each location is now known as a branch. For example Oregon Coast Branch, Joseph Branch, Vance Creek Branch.

JOSEPH BRANCH RAILRIDERS, the  original company, was established in  2014 on a  portion of the historic Joseph Branch Rail Road now known as Wallowa Union Railroad. WURR is 63 miles long and connects Elgin in Union County with the City of  Joseph in Wallowa County.  JBR uses 20 miles  of WURR  track to offer a 2 hour and  1/2  day adventure. The railroad  crosses through the high mountain Wallowa valley then follows the pathways of the Grande Ronde and Wallowa Rivers that  eventually flow into the Pacific Ocean.  The Eagle Cap Excursion Train offers  a variety of train rides from Elgin, http://eaglecaptrainrides.com/.  More  Railriding information about Railrider Cycling:Joseph Branch at http://jbrailriders.com/.